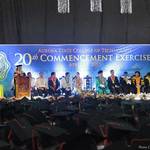 One hundred eleven poor but deserving students from the family-beneficiaries of the Pantawid Pamilya Pilipino Program(4Ps) in the province were given the opportunity to pursue a college degree through the Expanded Student’s Grant-in-Aid Program for Poverty Alleviation (ESGP-PA), a joint program of the Commission on Higher Education (CHED), Department of Social Welfare and Development(DSWD), Department continue reading : ASCOT Partners with CHED, DSWD and DOLE for the Implementation of ESGP-PA

Eight ASCOT alumni passed the Forester Licensure Examination, held July 14 and 15, 2013. The results were released two days after the examination. ASCOT had a performance rate of 15.69%. This year’s rate was much higher than last year by 3.19 %. ASCOT also had the highest number of examinees in the country with a continue reading : FLE results released, 8 new Foresters from ASCOT

ASCOT Casiguran held its 2nd Commencement Exercises last April 2, 2013 at the Bianoan Multi-Purpose Hall, Casiguran, Aurora. Eighteen graduates under the Department of Agriculture and Aquatic Sciences acquired their degrees in Bachelor of Science in Fisheries, eight graduates from the Department of Industrial Technology received their Certificates in Senior Electrician Course and four graduates continue reading : ASCOT Casiguran Campus on its 2nd Commencement Exercises

Scholarship beneficiaries and benefactors had an opportunity to exchange dialogue at the Benefactors-Scholars’ gathering last March 16, 2013 at the ASCOT Covered Court. The gathering was an opportune time for scholars to express their profound gratitude to their Sponsors who made their dream of pursuing higher education a reality. Word of thanks were given by continue reading : ASCOT Scholars Give Thanks to Benevolent Benefactors