The Association of Aurora State College of Technology Alumni 2013, Inc. has successfully launched its official partnership with local business establishments in the province to provide welfare to ASCOT, ALAS Inc. Card Holders (Bonafide Alumni Members) to receive and avail discounted goods and/or services from its partners in exchange to the establishment’s advertisement and promotion continue reading : ASCOT Alumni Association Signs MOU with Partners

The Aurora State College of Technology, the first and only State College in the province is commemorating its twenty (20) years of service to the people of Aurora. ASCOT was founded on December 30, 1993 by the virtue of Republic Act No. 7664. In line with the ASCOT’s 20th Founding Anniversary, the College has set continue reading : ASCOT Celebrates its 20th Founding Anniversary 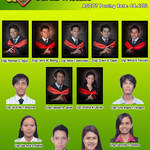 ASCOT has thirteen new Licensed Civil Engineers to add to its roster of successful graduates as PRC release the results of November 23-24, 2013 Civil Engineer Licensure Examination where ASCOT registered a 68.42% performance rate against the 48.12% national passing rate.

ASCOT garnered passing percentages higher than the national passing rates in the Licensure Examination for Teachers for the Elementary and Secondary level administered by the Professional Regulation Commission (PRC) last September 29, 2013. With the 31out of 34 BEED graduates who successfully hurdle the LET, ASCOT managed to post a 91.18 % passing rate against continue reading : Education Graduates Pass Licensure Examination for Teachers

The Department of Engineering continues its excellent performance in the licensure examination as shown in the result of the September 2013 Electrical Engineer Licensure Examinations where the College got a 20% passing rate. Engr. Andrew Gutierrez Nortez and Engr. Andrei Kristoffer Tan Querijero were the new additions to ASCOT roster of successful graduates. The two continue reading : New Electrical Engineers for ASCOT in September 2013 Board Exam

Eight ASCOT alumni passed the Forester Licensure Examination, held July 14 and 15, 2013. The results were released two days after the examination. ASCOT had a performance rate of 15.69%. This year’s rate was much higher than last year by 3.19 %. ASCOT also had the highest number of examinees in the country with a continue reading : FLE results released, 8 new Foresters from ASCOT The new set of officers of the ASCOT Alumni Association, Inc. for academic year 2013-2015 took their Oath of Office in a ceremony held on December 31, 2012.Dr. Eusebio V. Angara, College President and inducting officer led the ceremony as the new officers swore to abide and uphold the Constitution and By-laws of the ASCOT continue reading : New Set of ASCOT Alumni Association Officers Take Oath