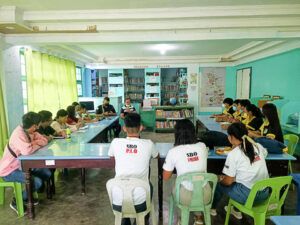 To prepare for the comeback of the much-awaited sports event participated by the higher education institutions in the province, the Aurora Collegiate Athletic Association (ACAA) held its first General Meeting at the Lyceum of the East – Aurora, Maria Aurora, Aurora March 11.

Student leaders from different colleges in the province, including Mount Carmel College (MCC) Baler, Aurora State College of Technology (ASCOT), Lyceum of the East – Aurora, and the former officers of the ACAA led by the former President – Mr. Lester Jude Nguteb from the Wesleyan University – Philippines participated in the said meeting.

One of the agendas of the general meeting includes the election of the new set of officers for ACAA and student leaders from ASCOT were able to secure positions like Justin Jade Leones as Vice President, Kristine Rose Corrales as Treasurer, and Jhaylord Matusale together with Jhulia Reyes as PIO for ASCOT.

Included also in the meeting was the discussion regarding the planning and preparation for the upcoming ACAA Season 3. ASCOT will be the assigned committee in some of the events such as softball, baseball, e-games like Mobile Legends and Call of Duty, surfing, and table tennis.

The tentative dates of the third season of ACAA are scheduled on April 25-29 this year wherein on April 11, student players and participants are required to submit necessary documents including notarized waiver, school ID, vaccination card, medical certificate, and the final master list of the participants. Those who will not be able to accomplish and submit the said requirements will be automatically disqualified from the event.

The organizers ensured to the participants and delegates that minimum health protocols from the Municipal Inter-Agency Task Force (MIATF) will be strictly enforced during the whole duration of the three-day sports activity.