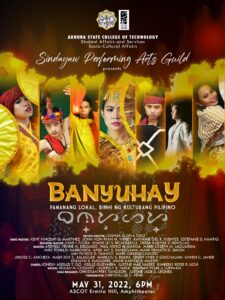 Making the audience say, “Wow!” in the showcase of some of the country’s indigenous dances through their colorful and graceful movements, the Aurora State College of Technology (ASCOT) Sindayaw Performing Arts Guild held a concert at the Aurora Capitol Grounds, May 31.

The show, entitled Banyuhay: Pamanang Lokal, Binhi ng Kulturang Pilpino, aims to preserve, promote, and protect the Philippine folk dances through their stage performances. In addition, the presentation also has the objective of creating a lasting impact and a sense of cultural awareness and belonging in the community as a response to the need for appreciation and respect for multicultural values and heritage.

Starting with their first performance with a bang that signaled the start of the 2-hour concert, the performing dance troupe presented native dances originating from the northern part of the country, like Manbuka, Chalichog, and Bumayah Uyauy; from Mindanao, including Kinakulangan, Pigapir, Asik, and Singkil; and dances from Barrio Fiesta like Subli Agoncillo, Arigay, and Bakya.

With almost 300 live audiences present and almost 600 virtual watchers, the concert was made possible through the collaborative efforts of the Student Affairs and Services and Socio-Cultural Affairs Offices of the College. The team also thanked the sponsors and other people, such as local government officials and establishments, who gave their support to make the event happen.

It can be remembered that this year’s Banyuhay is the second major concert of the dance troupe. The first time that the public was able to watch their grace on a big stage was in 2019, with their Pagsibol: Anniversary Concert.

The original venue of the Banyuhay concert was the ASCOT Ermita Amphitheater, but due to inclement weather that day, it was changed and moved to the Provincial Capitol Grounds.

In an interview, Mr. Joshua D. Dela Cruz, the concert’s Artistic Director and Sindayaw’s Adviser and Coach, he expressed his gratitude to all who support and give love to their guild especially to the dancers’ parents who give their understanding and assistance to their preparation for the concert.