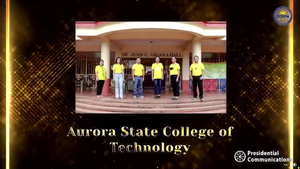 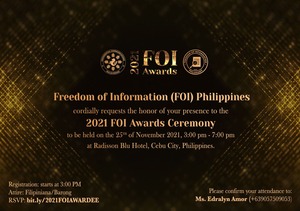 The Aurora State College of Technology once again won a national award this year after it was recognized as one of the government agencies and institutions that have exemplified great progress and performance in implementing the Freedom of Information (FOI) Program and included as one of the recipients of the Rising Star Award in the 2021 Freedom of Information (FOI) Awards, given in an Awarding Ceremony at Cebu City, November 25.

The initiative to effectively implement the FOI Program in ASCOT was one of the main objectives of the College’s Public Information, Publication, and Data Protection Office (PIPDPO) headed by Director Sherwin B. Glorioso, MIT; by attending to various activities, conferences, and webinars about the FOI, which tackled different topics especially on how to effectively put into practice the mandates of the said program to ASCOT as an educational institution.

With the support also of the College Officials, including our College President, Dr. Eutiquio L. Rotaquio Jr., and our Vice President for Planning and Finance, Forester Michelle A. Resueño, who are also two of our College’s FOI Decision Makers, ASCOT, was also able to comply and accomplish all the requirements required by the  Presidential Communications Operations Office (PCOO) to qualify as one of the awardees of the Rising Star Award this year.

This recognition also became completely possible with the assistance of Ms. Rona Jane Cacanindin, the College’s Acting Records Officer, to inquire and submit the requirements to the PCOO with Mrs. Dolores Salvacion Tolentino, Director of the College’s Planning Office; both are two of the College FOI Receiving Officers.

The implementation of the FOI Program reached and extended its service not only to the College’s Main Campus but also to its other campuses. It was strongly supported by two of the College FOI Decision Makers, the Vice President for Academic Affairs, Dr. Evi Q. Fontanos, in Bazal, and the Vice President for Research, Innovation, Extension, and Training; Dr. Eusebio V. Angara in Casiguran, together with Ms. Mancy Lota, also one of ASCOT’s FOI Receiving Officers.

The PCOO, the government’s lead communications arm that serves as the vehicle of understanding for a well-informed citizenry, gave this award as part of the celebration of the 5th Year Implementation of the Freedom of Information (FOI) Program in the Philippines.