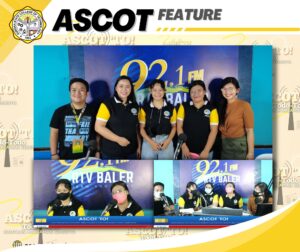 Our College’s Campus Journalists from The Voice of the Sierra, Maria Cristina Basco (Editor-In-Chief), Geraldine Guerrero (Head Layout Artist), and their Adviser, Ms. Melissa Grace P. Nacino, served as our guests for today’s episode of ASCOT ‘TO (Todo-Todo) at 92.1 FM RTV Baler!

In our program’s Episode 31 entitled “Boses ng Kabataang ASCOT,” our guests shared with our listeners TVOTS’ history as it began its operation and publication in 1994. Ms. Nacino also revealed some interesting trivia about the publication, including its first EIC, its name’s origin, the logo’s maker, and the first layout artist of its first issue.

In addition, Ghen and Cristina also discussed the different roles and positions in the publication, including their duties. They also talked about how they assigned reporters and writers who would cover events to be published in the newspaper. The two CJs also amazed us with the lessons they learned from joining TVOTS in developing not only their journalistic skills but also their holistic growth as individuals.

Our guests also shared some benefits that the College’s student-journalists are getting in publishing their works in the school organ. They also encouraged our aspiring writers, contributors, and journalists from ASCOT to join TVOTS in their year-round application schedule.