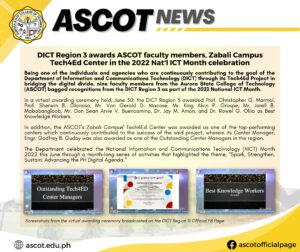 Being one of the individuals and agencies who are continuously contributing to the goal of the Department of Information and Communications Technology (DICT) through its Tech4Ed Project in bridging the digital divide, nine faculty members from the Aurora State College of Technology (ASCOT) bagged recognitions from the DICT Region 3 as part of the 2022 National ICT Month.

The Department celebrated the National Information and Communications Technology (NICT) Month 2022 this June through a month-long series of activities that highlighted the theme, “Spark, Strengthen, Sustain: Advancing the PH Digital Agenda.”