Unveiling of the marker for the ASCOT’s College of Law with Chief Justice Alexander Gesmundo and ASCOT College President, Dr. Eutiquio L. Rotaquio, Jr. with their faculty members and students

Indeed, a vision turned into reality!

Aspiring lawyers will no longer need to go outside the province to take their Juris Doctor or the course needed to become full-pledged legal practitioners as the Aurora State College of Technology (ASCOT) started the offering of the said course and became the first ever law school in Aurora in the 1st Semester of the Academic Year 2022-2023.

Making the opening of the course extra special and historical was the presence of the country’s Supreme Court Chief Justice, Alexander G. Gesmundo, as he graced and welcomed the first batch of ASCOT law students as the Guest of Honor at the inauguration of the ASCOT College of Law, held at the General Education Building, ASCOT Zabali Campus, Baler, Aurora, September 2. 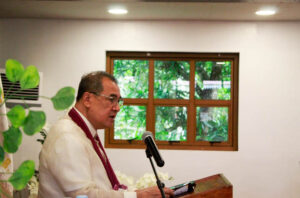 In his message, the Chief Justice stressed, especially to the students, that the most essential objective of lawyering is service.

CJ Gesmundo also presented a challenge and encouragement to ASCOT and to all law schools in the country to make legal education more responsive and relevant to the present needs of society.

On the other hand, the Chief Magistrate said that this is a very perfect time to open a law school as we are now transitioning our government’s systems and processes, including in the field of judiciary, to digital forms with the use of modern technology.

“Indeed, this is a propitious time to open a law school. We are at the crossroads of innovation and tradition, of technology and convention. And what better school to open a college of law than one with a good foundation in technology? ” he added.

“I cannot find any law school in our country that would have an environment so conducive to the study of law as this campus. I have traveled far and wide in our country and visited some law schools as a professor, as a lecturer, whatever. But I have yet to see such a place, so traditional and yet very promising, “he said.

Consisting of 41 students who passed the admissions process, the classes of the ASCOT’s Law School will be done via flexible learning for this semester with veteran law professors from inside and outside Aurora, led by its founding Dean, Atty. Racquel R. Dujunco, CPA.